Our lives operate around habits.

Don’t believe me? What are the first few things you do when you get up? They likely including getting dressed, brushing your teeth, and going to the bathroom.

Do you consciously think, “Okay, I’m up. Now I should get dressed.” No! You just get dressed. It’s a habit.

As Pulitzer Prize winner Charles Duhigg details in his recent New York Times bestseller, The Power of Habit: Why We Do What We Do in Life and Business

, more than 40% of all of our daily activities are habit driven.

And it’s both great and essential that these types of actions are automatic. Otherwise you would end up wasting a whole lot of unnecessary mental real estate on items that you more or less have to do every day, regardless. This frees up that mental energy to be used on more intensive tasks that you do have to actively think about in order to perform.

With that said, using our abilities (yes, you have them) to establish new habits can be extremely beneficial. And, in fact, that’s exactly how I go about getting almost all of things I do every day, done.

A while back, when I first decided I wanted to start dedicating a lot more effort to writing, I struggled. It wasn’t that writing itself was hard. It was writing consistently and productivelythat was the struggle.

Around the time I first started getting more serious about writing, I read some advice recommending you “write 1000 words a day!” “Great!” I thought. “I’ll do that! That sounds like a significant amount, and it will give me a great goal to work towards every day.”

ANNHH, WRONG! I consistently missed that 1000 words/day mark, got frustrated, and had frequent dry spells where I just didn’t write at all. It was discouraging, and I was ultimately working against my goal of writing more.

But I still really wanted to write more. How was I ever going to get on the right track?

Building habits to get stuff done every day

Around that same time, I had been consuming a lot of information on habits and habit formation. And again, this isn’t a secret, but the best way to consistently accomplish something is to: develop a good habit; and nurture that habit so that it develops into a system. As James Clear notes, great artists don’t wait for motivation, they develop strict schedules.

I don’t get things done by waking up every day and hoping that I’m really, really inspired to complete my consulting work, or really, really excited to write some new material. Nope. You know why? Because if I waited to feel like that in order to start doing things, nothing would ever get done. I use systems to accomplish all of my daily tasks. And they work.

And it seems the great majority of famous artists and writers feel, or felt, the same way, as discussed by Mason Currey in his book Daily Rituals: How Artists Work

In fact, Benjamin Franklin’s schedule was so precise that it was planned to the hour: 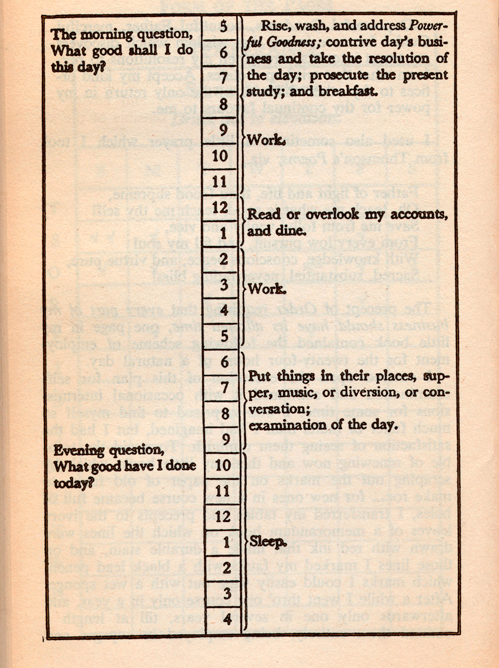 And as Currey mentions, “[Anthony] Trollope managed to produce forty-seven novels and sixteen other books by dint of an unvarying early-morning writing session.” I’d bet the house on him not producing even close to that many novels if he waited until he was “inspired” every day to begin writing.

Don’t get me wrong: there’s nothing wrong with setting goals. But here’s the secret: make the goals small and attainable. Everyone likes achieving a goal, right? And you get a nice psychological boost when you do: “Nice! I just hit my mark! I rock!” You know the feeling. And it’s a good feeling. These are typically referred to a “small wins”.

As noted by the Harvard Business Review in their article on small wins and feeling good, if you keep your goals both small and attainable, you’re going to accomplish even more of them. More accomplishments = more boosts. Awesome! And it’s proven that the positive encouragement of completing these goals can help you develop a more consistent behavior. It has sort of a snowball effect: you create a small goal; you achieve it; you feel good about that, and you congratulate yourself; you’re inclined to keep doing it! Makes sense, right?

And, in fact, there’s an incredibly effective system, Tiny Habits, developed by Dr. BJ Fogg, based around these exact principles. As detailed by Success.com, in their article on Dr. Fogg’s Tiny Habits system, it helps you take create extremely small (hence the “tiny”) goals that you can easily achieve every day, and use those successes to establish a new habit. So say, for example, one of your tiny goals is to floss just one tooth every day. Easy, right? After doing it consistently for about a week’s time, it becomes a habit — you’re just naturally inclined to continue doing it, day after day.

And the idea is, at that point, it’s then much easier to evolve that “tiny habit” into a more substantial one, such as flossing all of your teeth. (I highly recommend Tiny Habits. I’ve done it myself multiple times and it really does work. It’s a great way to jump start to new things you’ve been looking to do more consistently.)

One of the tenets of the Tiny Habits method is positive self-celebration, or as I like to call it, “self cheering”. Every time you complete one of your Tiny Habits, you’re supposed to congratulate yourself, which Fogg has learned is crucial in the cementing new habits. As Fogg notes, “Notice how often athletes celebrate and when they do it—immediately.” This almost forces those feelings of satisfaction, which, as mentioned earlier, tend to be at the core of successfully achieving goals, as well.

And the best part about Dr. Fogg’s system is that you can apply it to nearly anything. Wanna do more pushups? Great — do one every morning after you step out of bed. Wanna learn to code? Great! (I wholeheartedly support this one!) Write one line of code every night after dinner. Pretty soon, your Tiny Habits will be in place, and you’ll be surprising yourself by how much progress you’re making, just by doing that one thing consistently, day in and day out. It’s almost like magic.

Focus on the process, not the output

So why am I telling you all of this? Well, because it can be applied to nearly anything — from consistently flossing your teeth to learning to code, as mentioned previously.

If you only come away with one thing after reading this, let it be this: focus on the process. Don’t focus on your output. Output will come with consistency.

As I mentioned, when I first started dedicating more energy to writing, I tried to consistently write 1000 words per day. And many days I didn’t get there. I would write for an hour but not reach that 1000 word mark. And then I would be bummed out: “I wrote for a whole hour and I still didn’t get to 1000 words. I suck.”

WRONG. I still wrote! I still wrote more than zero words! And that is the most important thing: when you start out doing something, focus on doing it consistently, not necessarily well. You get much better/faster/more efficient as you do things more often.

Take this example, an excerpt from the book Art & Fear: Observations On the Perils (and Rewards) of Artmaking

His procedure was simple: on the final day of class he would weigh the work of the “quantity” group: 50 pounds of pots rated an A, 40 pounds a B, and so on. Those being graded on “quality”, however, needed to produce only one pot – albeit a perfect one – to get an A.

Well, come grading time and a curious fact emerged: the works of highest quality were all produced by the group being graded for quantity!

It seems that while the “quantity” group was busily churning out piles of work – and learning from their mistakes – the “quality” group had sat theorizing about perfection, and in the end had little more to show for their efforts than grandiose theories and a pile of dead clay.

Notice how consistency won out. The more they created, the better they got over time.

It takes time and practice

Of course I wasn’t hitting 1000 words per day when I was just starting out! And sometimes I still don’t. Most things aren’t an exact science like that. It very much depends on the nature of what I’m writing on any given day. Some days I crank through over 1000 words in under an hour. Sometimes it’s half of that. But the important thing is the system that I established. I write almost every day now, and I have nearly an entire book an entire course to show for it.

And it’s that consistency that has yielded the results. Not chasing after a relatively arbitrary goal day after day. R-E-P-E-T-I-T-I-O-N. Plain and simple.

Next time, I’ll discuss how one habit’s driven another and skyrocketed my writing productivity.

Until then, think of how you can start establish habits to help you accomplish the things you want to get done every day!